Cruise of a Lifetime!

What a dream come true to see my newest project, Savor, come to life in the region where Sephardic music and food flourished! Join me and Chef Susan Barocas as we sail from Athens to Istanbul (stopping in Mykonos, Rhodes, Antalya, Bodrum and Ephesus) with a hands-on exploration of Sephardic music and food all along the way. A once-in-a-lifetime opportunity! Click on the image below to learn more. 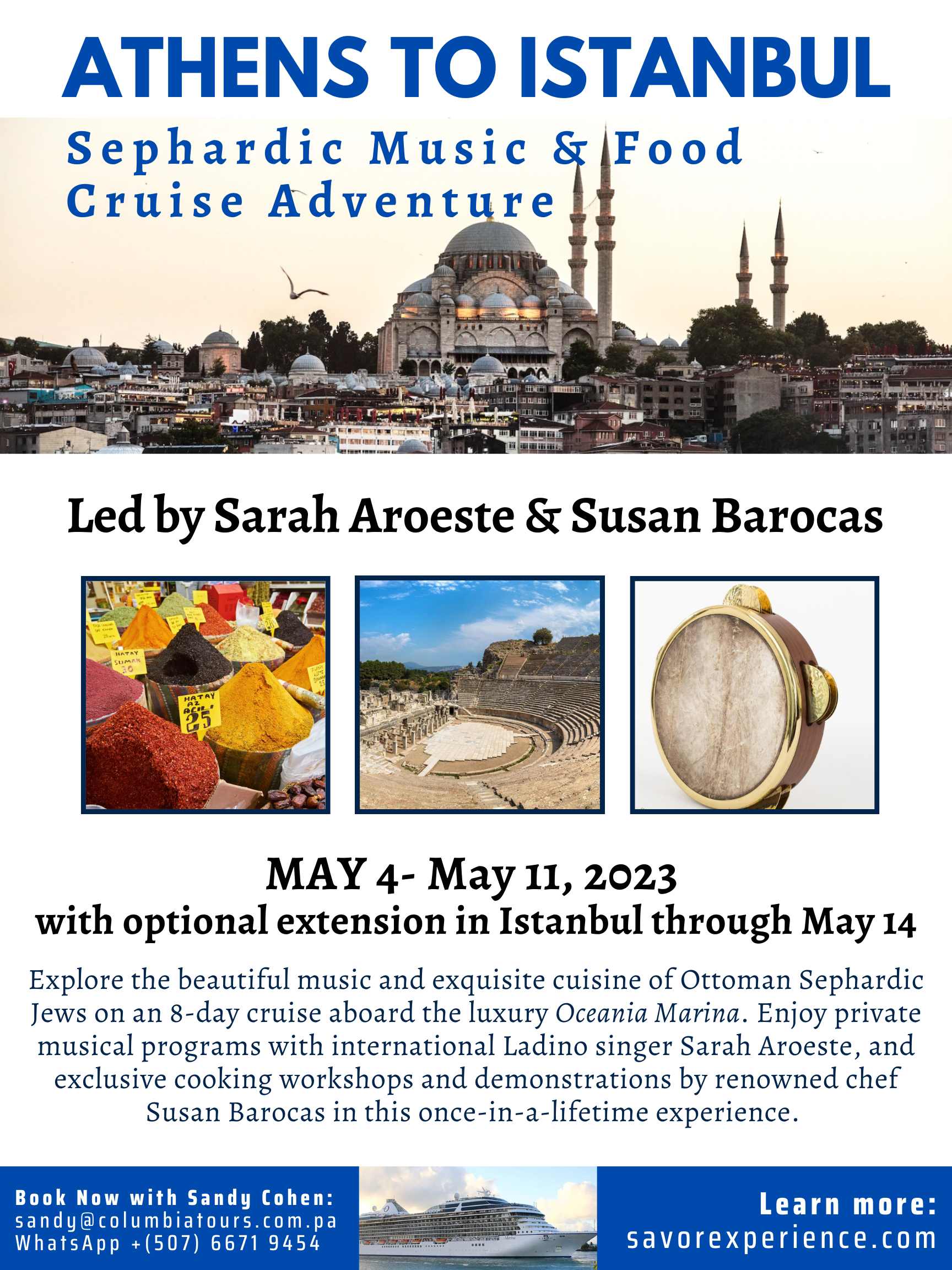 I am so excited to share the cover of my newest book, coming out on April 4, 2023. Mazal Bueno is a board book for young families celebrating the most delightful milestones in a baby's life. I can't wait for you to read it! You can even pre-order it starting now! 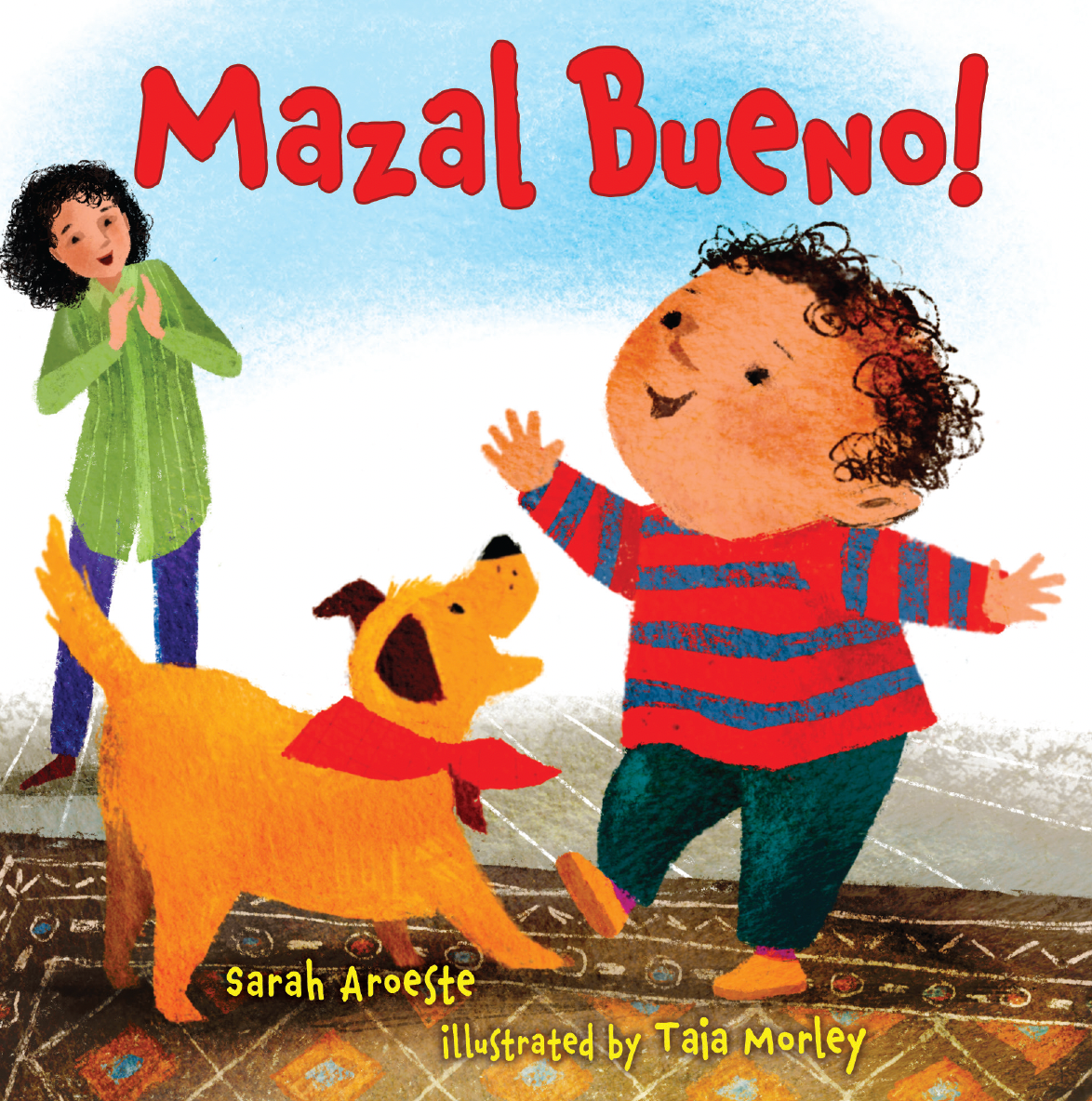 The Birth of a New Year

Today I'm releasing a new video, close to my heart as a mother. While not a traditional Rosh Hashanah song, Oy Qui Muevi Mezis (Oh What Nine Months) is part of the Ladino repertoire of Kantigas de Parida (birth songs). It is a song about birth, life, community, and blessings - all themes central to the High Holy Days ahead. (Listen for the shofar call in the song!) May you find inspiration and reflection in this music, and may you all be inscribed in the book of life!

On to the Next!

After a whirlwind summer tour, I came back in August and got started right away on recording my newest project, Savor. I cannot wait for you to take a listen - and taste! - of this new record, which combines Ladino songs about food with recipes and demos from celebrated chefs. Thanks to my amazing production team of Shai Bachar and Marko Gurkan at Kicha Studios in Tel Aviv, and a cameo by these little missies here, you all are in for a treat!! Release info coming soon... 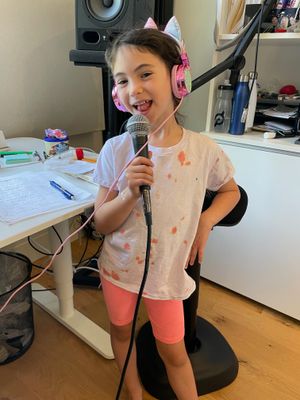 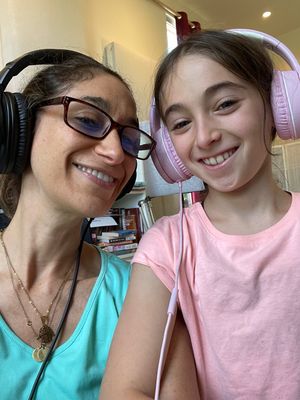 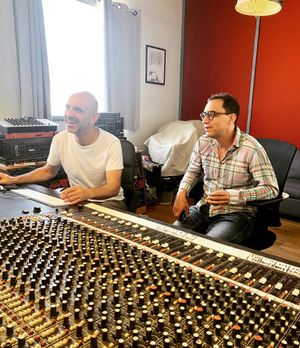 What a dream come true it was to perform my Monastir album LIVE in N. Macedonia during the month of July. Recorded during the pandemic, the album had never been performed in front of a live audience. Now was our chance. I brought together 3 Israeli musicians and 3 Macedonian musicians (and me!), as we presented performances at three of the largest music festivals in the country: Skopje Summer Festival, Ohrid Summer Fest, and Bitola Lokum Festival. Words cannot begin to describe what an amazing experience it was to see my vision - of musical collaboration celebrating the lost Sephardic community of Monastir - become reality. Here's just a small taste in pictures: 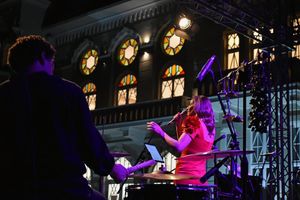 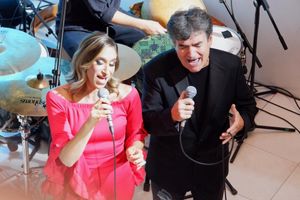 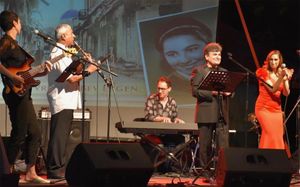 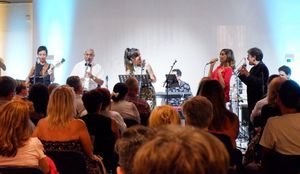 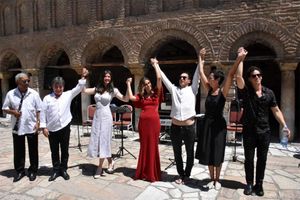 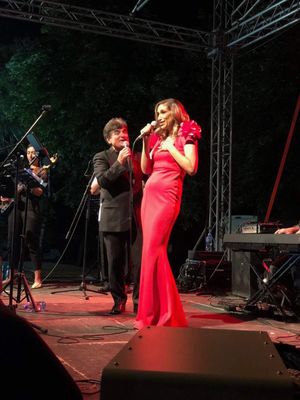 I hope my ancestors would be proud!

For one week in June I got to experience camp life. But not just any camp. Sephardic Adventure Camp (SAC)! SAC is truly one-of-its kind in America, where Sephardic kids can go to explore their culture through music, food, Jewish ritual and more. It was extraordinary to share Ladino songs with children whose families are so deeply connected to Sephardic life. I can't wait to return next year! Click here to learn all about SAC. 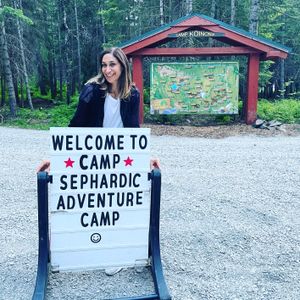 I am thrilled to announce the launch of my newest endeavor!! Savor (pronounced sa-VOR, and meaning "taste" or "flavor" in Ladino) is an innovative project that combines Sephardic music and food in a multi-dimensional way. We've paired 10 Ladino songs about food with 10 recipes that are being presented by acclaimed female chefs whose work helps to promote Sephardic culture. The result will be a wide variety of people engaged in conversations that combine Sephardic history, food, and music. We want you to be a part of it!  Watch a short video about Savor and then click below to get a taste!!

Have you caught my two new web series I began at the start of 2023? One third of the way into this year, and they're going strong! The first, Cute Kids Speaking Ladino, features my own daughter with a weekly phrase or concept she teaches us in Ladino. The second, the Refran Rundown, has me breaking down a fun Ladino proverb or saying.

Today marks a tragic day in history, when, on March 11, 1943, the Jewish population of Macedonia was deported during WWII. 79 years later, I am here to offer some beauty and hope.

For the last several years I have worked in Macedonia to bring alive the stories of the Jewish community from long ago. Today, I want to share a song I wrote, using the memories of my own family members who were born in the city of Monastir.

I filmed this video in 2021 throughout Monastir's old Jewish neighborhoods, most notably on the balcony of my ancestral family's house (where you can still see the Jewish stars in the iron work), and in the abandoned building of the Talmud Torah (Jewish school). Together with an almost entirely Macedonian production crew, I created this music video (in the Monastirli dialect of Ladino) to bring to life the textures of this once vibrant Jewish community.

I hope it honors all those who were lost, and those who live on today to tell their stories.

While COVID has disrupted so much travel, borders are finally opening again and I am thrilled to offer the chance to come to Macedonia with me! Be my VIP guest learning about Jewish heritage in this magnificent region, and see me premiere my live Monastir show in the capital city of Skpoje! Ready for an adventure of a lifetime? All info can be found here.